HOW DO FIRES WORK?

Fire can destroy your house and all of your possessions in less than an hour, and it can reduce an entire forest to a pile of ash. It’s also a terrifying weapon, with nearly unlimited destructive power. Fire kills more people every year than any other force of nature.

But at the same time, fire is extraordinarily helpful. It gave humans the first form of portable light and heat. It also gave us the ability to cook food, forge metal tools, form pottery, harden bricks and drive power plants. There are few things that have done as much harm to humanity as fire, and few things that have done as much good. It is certainly one of the most important forces in human history. But what is it, exactly?

The ancient Greeks considered fire one of the major elements in the universe, alongside water, earth and air. This grouping makes intuitive sense: You can feel fire, just like you can feel earth, water and air. You can also see it and smell it, and you can move it from place to place.

But fire is really something completely different. Earth, water and air are all forms of matter — they are made up of millions and millions of atoms collected together. Fire isn’t matter at all. It’s a visible, tangible side effect of matter changing form — it’s one part of a chemical reaction. Call us today to look after your fire safety certification.

Do you know how fires work?
Fires are a chemical reaction between three (3) elements.
FUEL – HEAT – OXYGEN
If one (1) of the elements is removed, the fire will be extinguished. 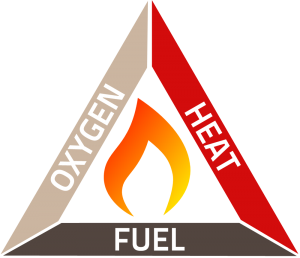